What is a FIDEI DONUM Priest?

The expression « Fidei Donum » in Latin means « the Gift of Faith».

This is the name of the encyclical of Pius XII on 21 April 1957, which called on all bishops to share his vision “to face the challenges of the universal mission of the Church”. This involved not only by means of prayer and assisting each other but also by making priests available to other continents.

After accomplishing their missions abroad, the priests still attached to their diocese are referred to as “Fidei Donum priests.”

Father Raymond was the first to be called by the Lord to be part of this community of priests and in a providential way:

“By working in the parish of Besançon, I decided to give children a missionary opening by offering to help a priest, from our parish and on a mission in Chad. He needed to drive a lot and the tires were very expensive.

With the children we organized a collection of paper and newspapers, which once sold, helped finance the Father’s needs in Chad. He warmly thanked the children for their service to the poor and I thought I’d be so happy to be sent away with those tyres … this is how strong my desire was to go on mission. God would soon fulfil my dream.

One Sunday, during the Eucharist, I asked God to be his messenger and speak of his peace by continuing to “create stronger links between our communities and to rebuild the People of God unanimously,” according to the words of our Pope John Paul II.

Shortly after, I received a request to travel to the Cameroon after our Bishop of Besançon had received an urgent call for help: A leper colony in the Cameroon needed a priest. On 24 August I arrived in Douala, on African soil, to live amidst 400 lepers in Dibamba.”

Given the magnitude of the mission and the masses of work, Raymond prayed to get assistance from a brother and it was with immense joy that one day he received a letter from his brother Pierre, offering to help him and asked his opinion. Raymond replied: “Come immediately, I’m waiting! “.

It is primarily under the direction of Bishop Zoa, that the two brothers remain committed to their mission for more than 40 years 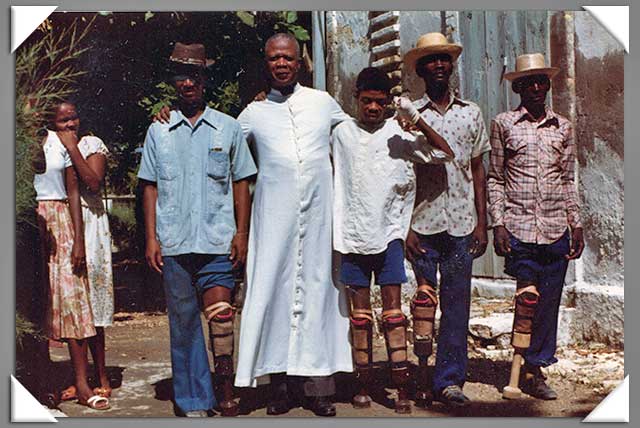