Their mission to help leprosy sufferers 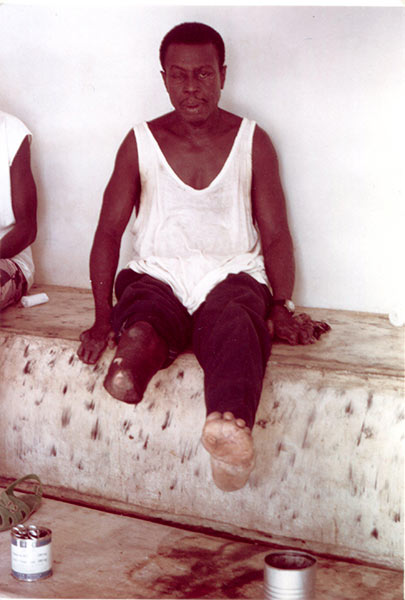 Since entering  the world of lepers, we found two groups of patients: those for whom everything was undertaken from a medical point of view, surgical, medical, financial, and social and then of those ones believed: “There is nothing more to do. They are lost. Their feet and hands are covered in ulcers which are incurable.It is this group of lepers that we chose to dedicate our lives to as priests.”

Providentially, after 8 years as an assistant parish priest in Besançon, Father Raymond Jaccard was sent in 1967 to the Cameroon, Douala, to help 400 lepers.

There, he discovers the mutilated men and women, dragging themselves on all fours, with hands that have no fingers. Almost all of those leprosy patients have already spent a quarter of their lives in this condition.

Rolling up his sleeves, he goes to work, and adopts the plan for treating the lepers ranging from foot baths with soap and water, to the bandaging of the wounds that are repeated three times a day. 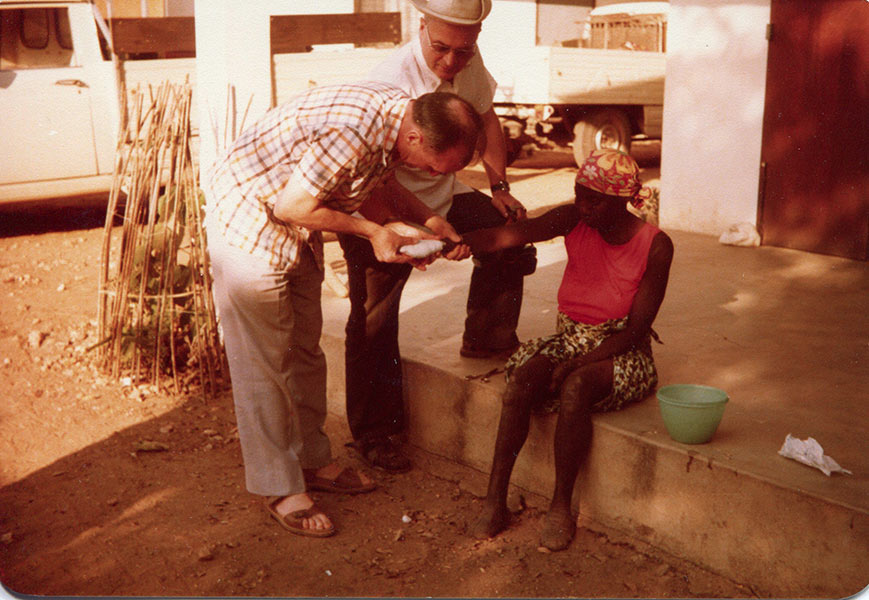 However after a while, when facing their suffering and with a situation that does not seem to improve, Father Raymond asked himself: “What have they ? Of course they are lepers. But what else is there? … I am lost : speaking to them of God, of his suffering on the cross is impossible under these conditions. I need to understand why they suffer so much. I need to undo their dressings, I need to understand why they cannot walk and why they have been here for so long. […] This unbearable situation continued four years. In the end, not knowing any more what to do, I met with a surgeon friend in Douala […] The diagnosis ? The answer was unexpected and heavy of consequences : the bones of the feet have deteriorated not by leprosy but because of osteitis rendering the feet numb.  Leprosy damages the nerves, but it is osteitis which is responsible for the infection of the bone.

Father Raymond in a passionate discussion with the surgeon:

– But once the diagnosis of osteitis has been confirmed – what can be done?

– The surgeon replies there is only one way: “surgical intervention !”

Audaciously after receiving an express training from his surgeon friend, the Father embarks on small interventions, with rudimentary equipment. The results are encouraging, and little by little, thanks to the “hands-on” experience and teaching received from surgeon friends, he perfected the surgical excision of the feet and legs of lepers suffering from osteitis.

Enthusiastic and motivated by such success, Raymond returned to Paris, in France, where he underwent medical training with surgeons and prosthetics technicians renowned in their domain. Raymond had understood that it was not enough to simply amputate limbs but one had to teach patients to walk again.  In addition there was no such thing as a Centre for prosthesis in the Cameroon, so all had to be organised and built from scratch. On his return from Africa he was asked by Archbishop Zoa to visit the leprosy Centre of Jamot, also referred to as « The Hill of Suffering » 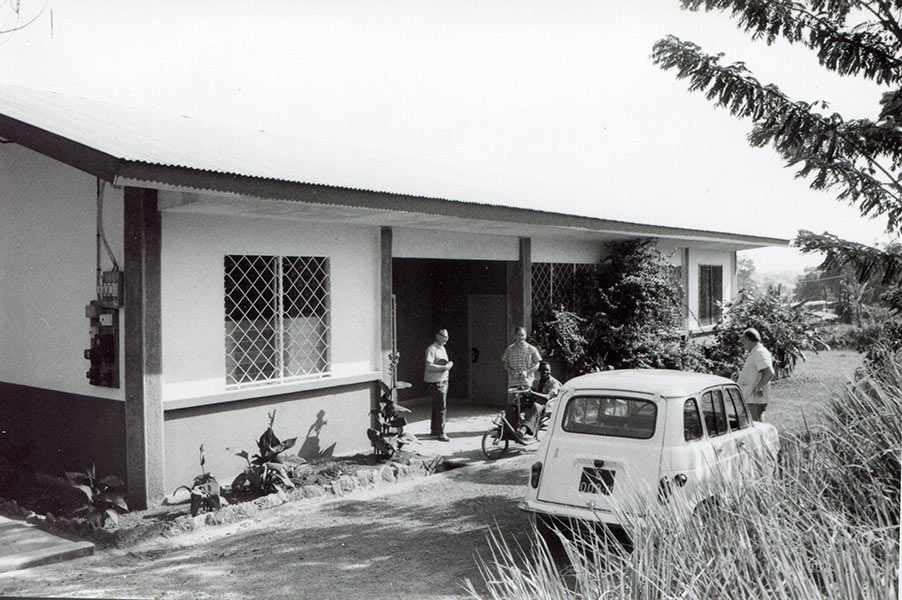 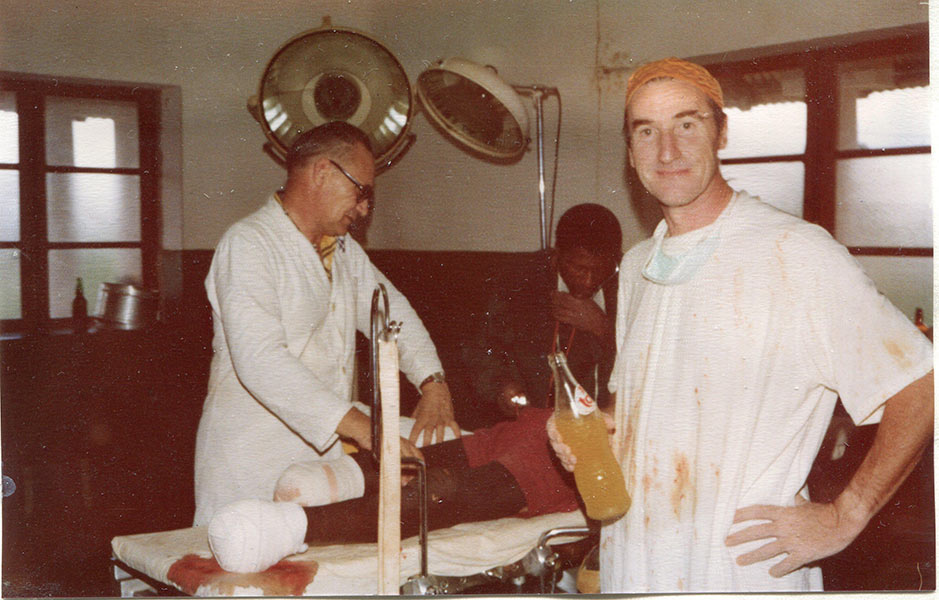 Thanks to their first-hand experience whilst living with the patients, they quickly understood the reality of their patients’ lives and invented a small, functional prosthesis which was simple to build with local materials. The brothers made a point of honour that the lepers who refused charity, would become responsible for their own prosthesis and become owners of their new limbs, applying an old saying that “it is better to teach someone to fish rather than to give him fish”. 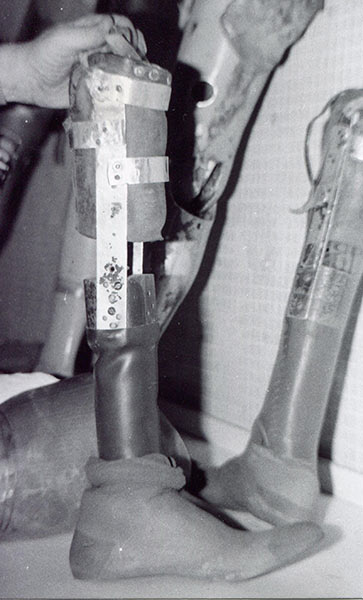 At the request of Archbishop Zoa, the brothers published the results of all their work in a book entitled: A New Man – The disabled leper, operated and equipped. This manual intended for physicians whose working conditions are not comparable to that of modern hospitals- rely on the discoveries and the advice given.

Many African countries request that the brothers share their experience with them and organize training sessions covering surgery and prosthetics.

Word quickly spread beyond the borders of the African continent, and this is how they came to share their discoveries throughout the whole world: India, the Missionaries of the Charity of Mother Teresa, Egypt, the Philippines, Chad, Madagascar and Thailand etc.

Everywhere, men and women condemned by the disease to the point of it infringing their sense of feeling “human”- finally learn to get up and walk again, regaining their dignity. In doing so they became tangible examples of the message of resurrection in which the two brothers so deeply believe.